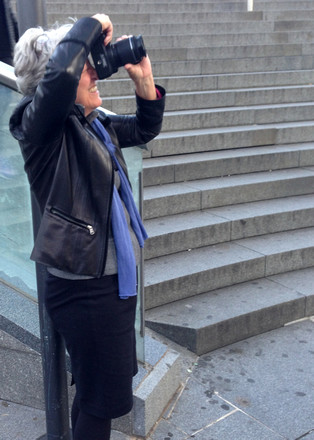 Peggy Bilbro is a photographer and artist living in Huntsville, Alabama. She began to develop her photographic and artistic interests after retirement from her first career as a language teacher. Working with a basic camera, Peggy produces photographs with an almost abstract vision, particularly of the urban environment. Her work concentrates strongly on composition, particularly of shadows and angles not ordinarily noticed by the observer—the angle of light through an arch, layers of color revealed by a crack in the masonry, or the lines of intersection between  a column and a rounded window. In recent months she has begun exploring more focused images, but with a continued emphasis on composition. Her literary studies and writing history have led her to attempt to translate the lyrical counterpoint of nature and humans into her photographic images. Much of her photography is the result of her travels from the U.S. Southwest, to Europe and Asia.

Peggy’s education was in Spanish Language and Literature, with no formal training in art or photography. She has been a writer for many years, specializing in poetry, and has been a long-time member of The Writers Group, a small group of women writers in Huntsville. Since her retirement Peggy has also begun working in a variety of other artistic media, from charcoal to oils. She has studied with several local artists, primarily with Rhonda Mitchell and Dana Bathurst. Her photographs have been exhibited at the 2014 Monte Sano Art Festival, the aRtZ Studio, 2304 Whitesburg Dr., Carrie’s Kitchen, in Clinton Row and 2015 Panoply of the Arts.